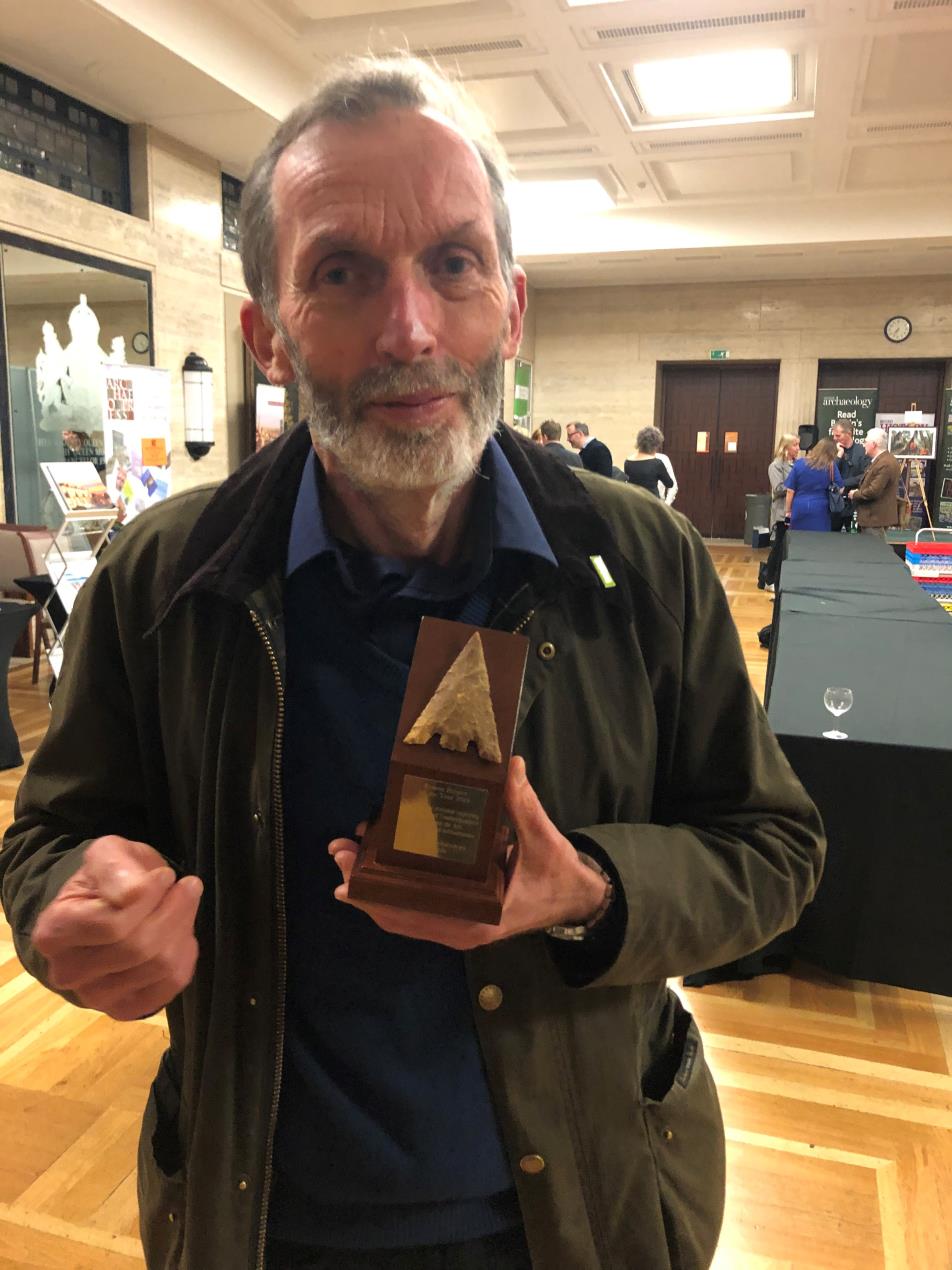 Caption: Dr Sherlock with the Current Archaeology 2019 ‘Rescue Project of the Year’ award

Mammoth tusks, rare Roman coins, and Britain’s oldest beer have all been among the amazing archaeological finds on Highways England’s £1.5 billion programme to upgrade the A14.

Now the award-winning work has received a further nod, with lead archaeologist on the project, Dr Steve Sherlock, being nominated for Current Archaeology’s 2020 ‘Archaeologist of the Year’ award. A win would see Dr Sherlock and the A14 team build on their success in the 2019 ‘Rescue Project of the Year’ category.

Steve’s work on the A14 started in 2017. Since then, he and his team have made numerous fascinating discoveries, all the while managing to not delay Britain’s biggest roads project, for which a key section, the new 12-mile Huntingdon bypass, opened a year early last month.

The Yorkshireman, has worked on uncovering Britain’s past for over four decades, leading historical projects in his native Teesside, on which he has recently published a book, while also leading the way on major infrastructure projects.

Next up for Steve is the chance to explore thousands of years of history on the Cambridgeshire and Bedfordshire border, leading archaeological work for Highways England’s A428 Black Cat to Caxton Gibbet improvement.

Dr Sherlock did a degree in history at Stafford, before taking his Master’s at Birmingham, and then starting his PhD at Durham and completing it at Leicester. He started as an archaeological digger at Kimmeridge in Dorset work in 1979, excavating Roman finds and pottery  for Wessex Archaeology.

Moving back to the North East, he became a digger supervisor for work at Redcar, Cleveland. He excavated his first major project, an Anglo-Saxon cemetery in Norton in 1984, among other projects, before starting work on at the A1 upgrade to a motorway from Wetherby to Walshford in 2003, when discoveries included finding an Iron Age chariot at Ferrybridge. 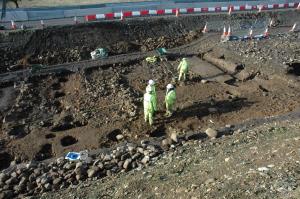 Caption: excavations of Roman buildings at Catterick during the dig there

“I started my own research project in Street House in North Yorkshire, where we found a very rare Anglo-Saxon bed burial within the grave of a princess, evidenced by the gold brooches on her chest,” said Steve. “The work here really raised the profile of heritage in the area, and now they have heritage walks and a small museum is now being proposed there.”

Steve’s work on Operation Nightingale, a project working with injured military veterans working on archaeology excavations, saw him win the Teesside Heroes’ Award in 2015, shortly after he began work on the A1 upgrade to motorway between Leeming and Barton in 2014.

“We excavated a Roman town at Catterick and found a substantial amount of Roman and Iron Age remains at Scotch Corner, including very early coin “pellet” moulds.” 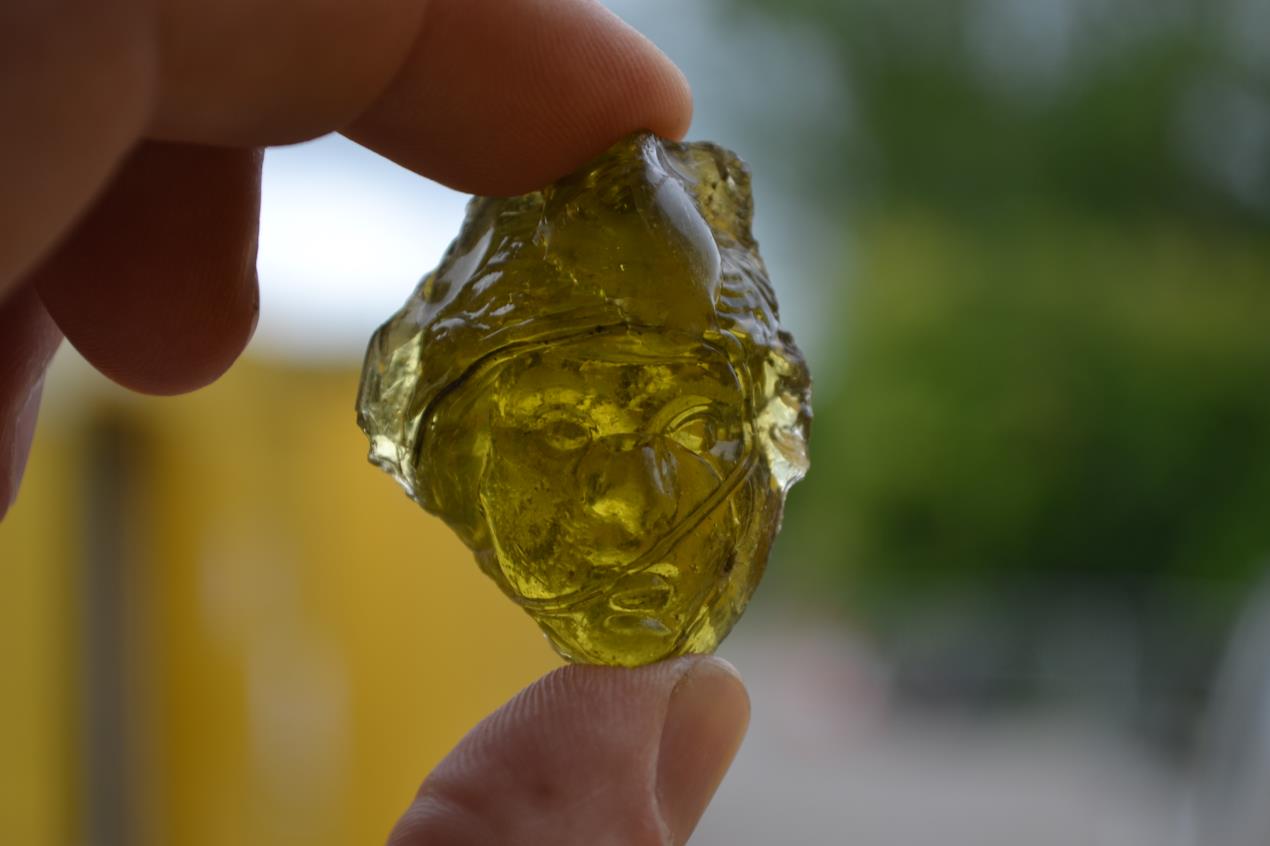 Caption: this glass face of Bacchus, the god of wine, was among the remarkable Roman finds at Scotch Corner

Highways England tasked Dr Sherlock with leading its archaeological work for the A14, which hired up to 250 archaeologists at its peak.

“We needed to have a targeted approach to archaeology, and to do it to a high standard without holding up to delivery of the road. During our work we found three Anglo Saxon villages, 41 Roman pottery kilns with 215,000 shards of pottery weighing 2.8 tonnes, and 15 Iron Age and Roman settlements.

“Each of the three Anglo Saxon villages was of a different character: one a linear village beside the A1 at Brampton Hut,  which was  a Roman road at that time; the second a planned village at Houghton west of Brampton; and the third an enclosed hilltop  settlement  at Conington, which is translated as “King’s Town”, believed to be a border settlement on the frontier between the Dark Age kingdoms of East Anglia and Mercia. 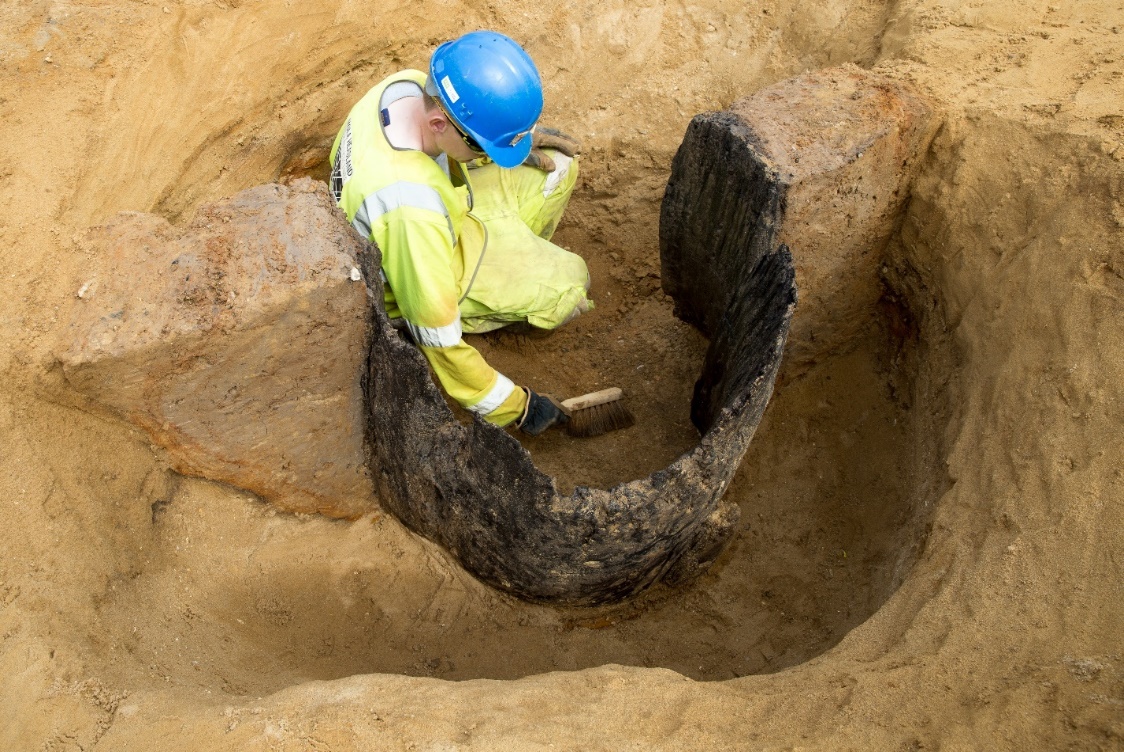 Caption: the A14 team excavates a wooden barrel in the Anglo-Saxon village near Brampton

“There were also Neolithic burial sites and seven Bronze Age burial mounds; in total there were almost 500 human remains from all excavations on the A14. We also found a Roman supply depot near Fenstanton, a Roman villa, and some 3.8 tonnes of animal bones.”

During the work, the team found the earliest evidence of beer brewing in Britain, with boiled grain remnants forming a mash indicating use in the fermentation process, dating back to 400 BC. 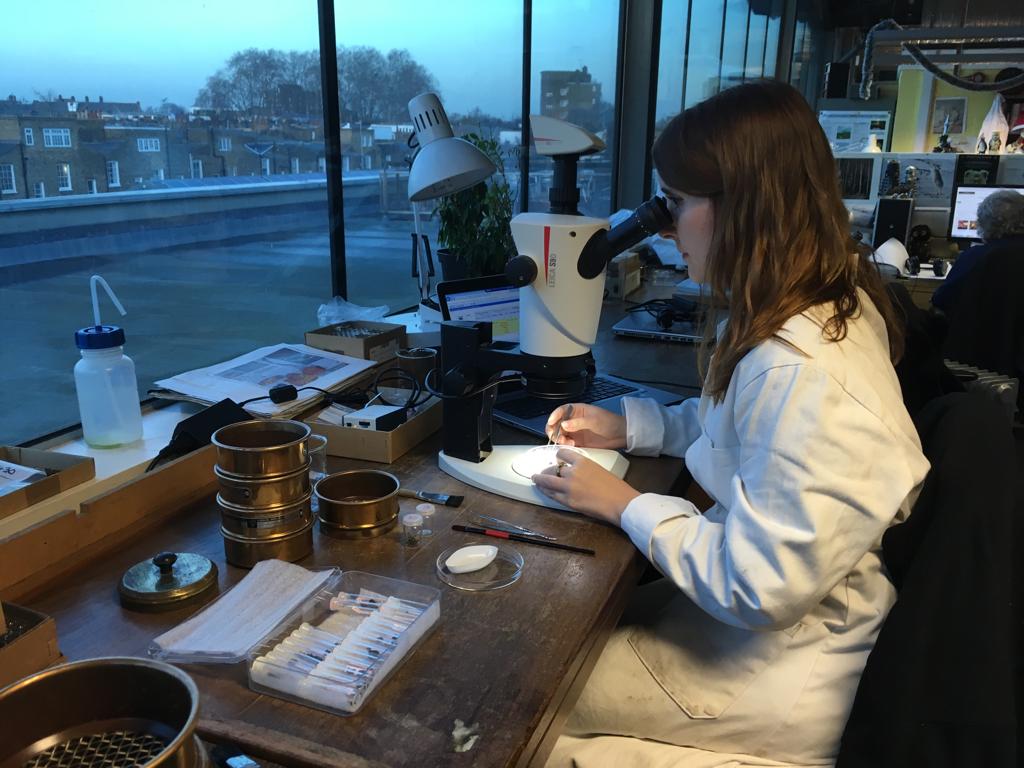 Caption: MOLA Headland’s Dr Lara Gonzalez examines charred grain dating back to 400BC, the earliest evidence of beer brewing in Britain, discovered on the A14

Another incredible discovery was a rare coin of the ill-fated Roman Emperor Laelianus, who, whilst he was campaigning on the continent, had the coin minted in Mainz. The usurper emperor arose as a contender for ruler of the splinter Gallic Emperor during the Crisis of the Third Century, and his reign lasted perhaps two months before being assassinated – meaning he was likely already dead before the coin was being used in Cambridgeshire. 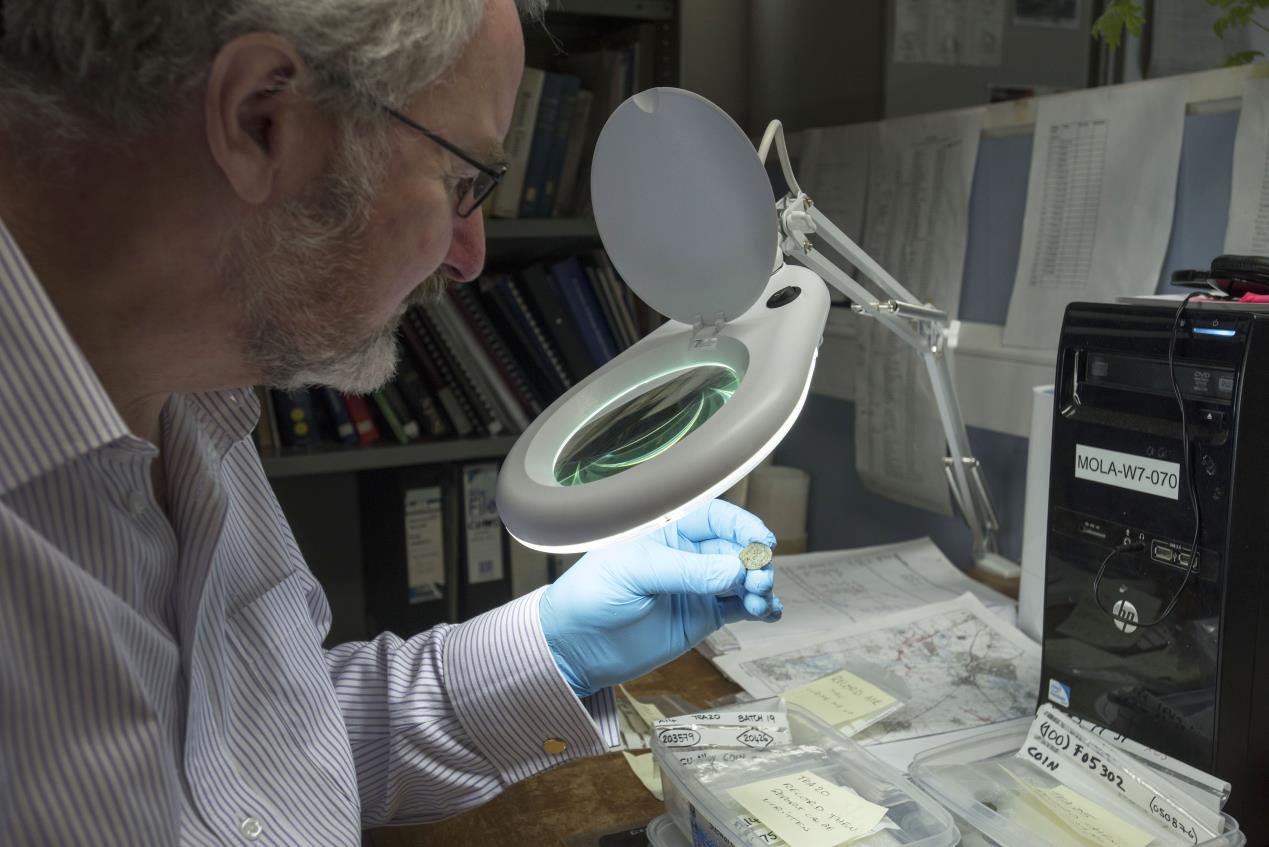 Caption: MOLA Headland’s Dr Julian Bowsher examines the rare coin of the Roman Emperor Laelianus, only the second of its kind to be unearthed in Britain

Separate to the archaeologists’ work, digger operators were also careful when removing gravel from borrow pits – areas of lands rich with materials usable for construction – for use on the road to ensure they did not damage anything beneath. Their caution paid off, and among the items found in the pits were parts of 11 woolly mammoth tusks and three woolly rhino skulls, with parts of a further four all dating back to at least 40,000 BC. 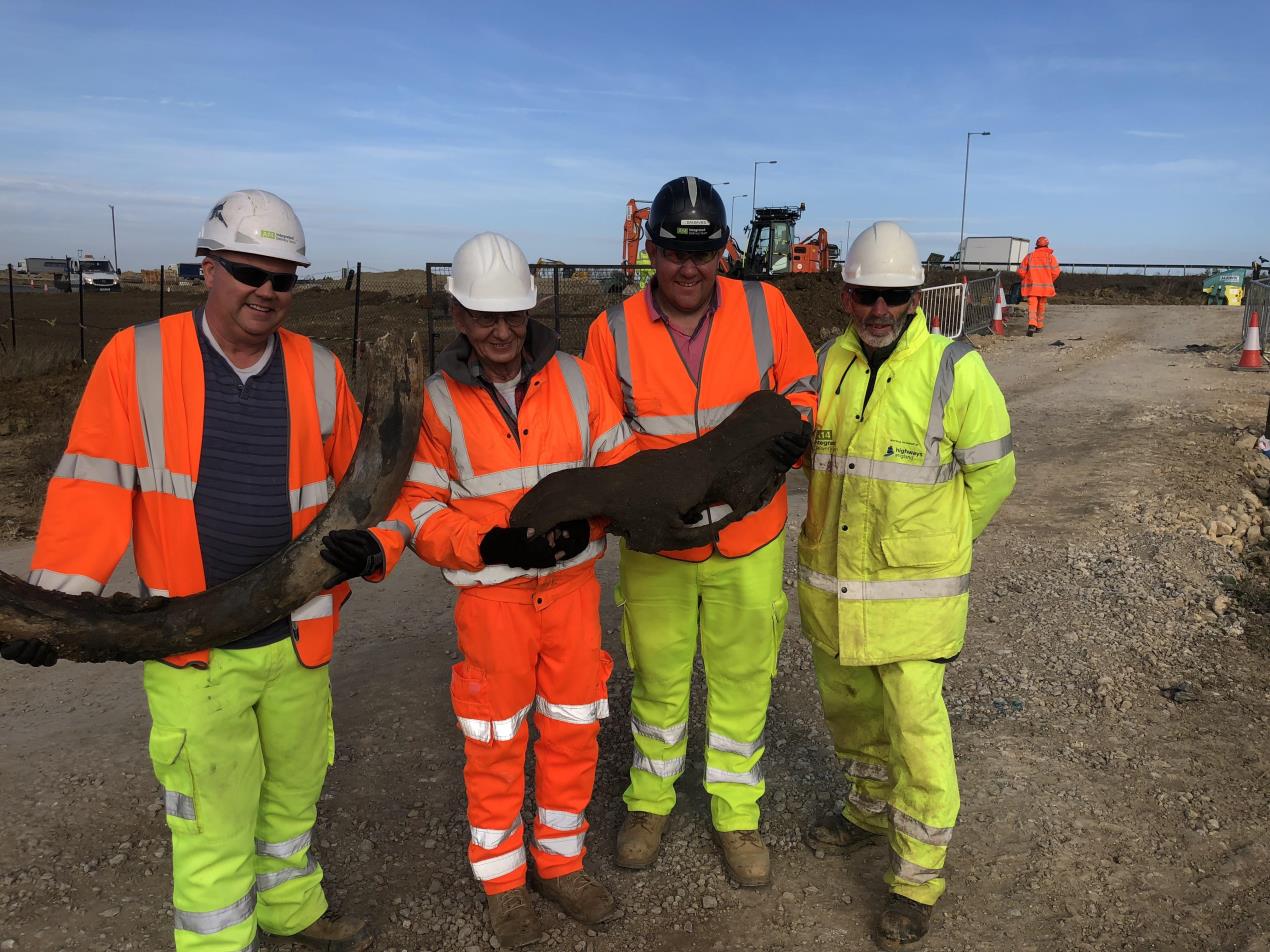 Caption: digger operators came across finds including the woolly rhino skull and woolly mammoth tusks thought to be at least 40,000 years old, while excavating the project’s borrow pits

“We found an abandoned Medieval village at Houghton,” Steve continues. “The general story with such villages is that they’re abandoned following the Black Death in the Fourteenth Century, but this one seemed to have been abandoned earlier. There’s the suggestion that the nearby wood to the west was taken for use as the King’s estate, and with the locals unable to hunt animals, collect timber and forage within the wood where the village was, the settlement was no longer sustainable. 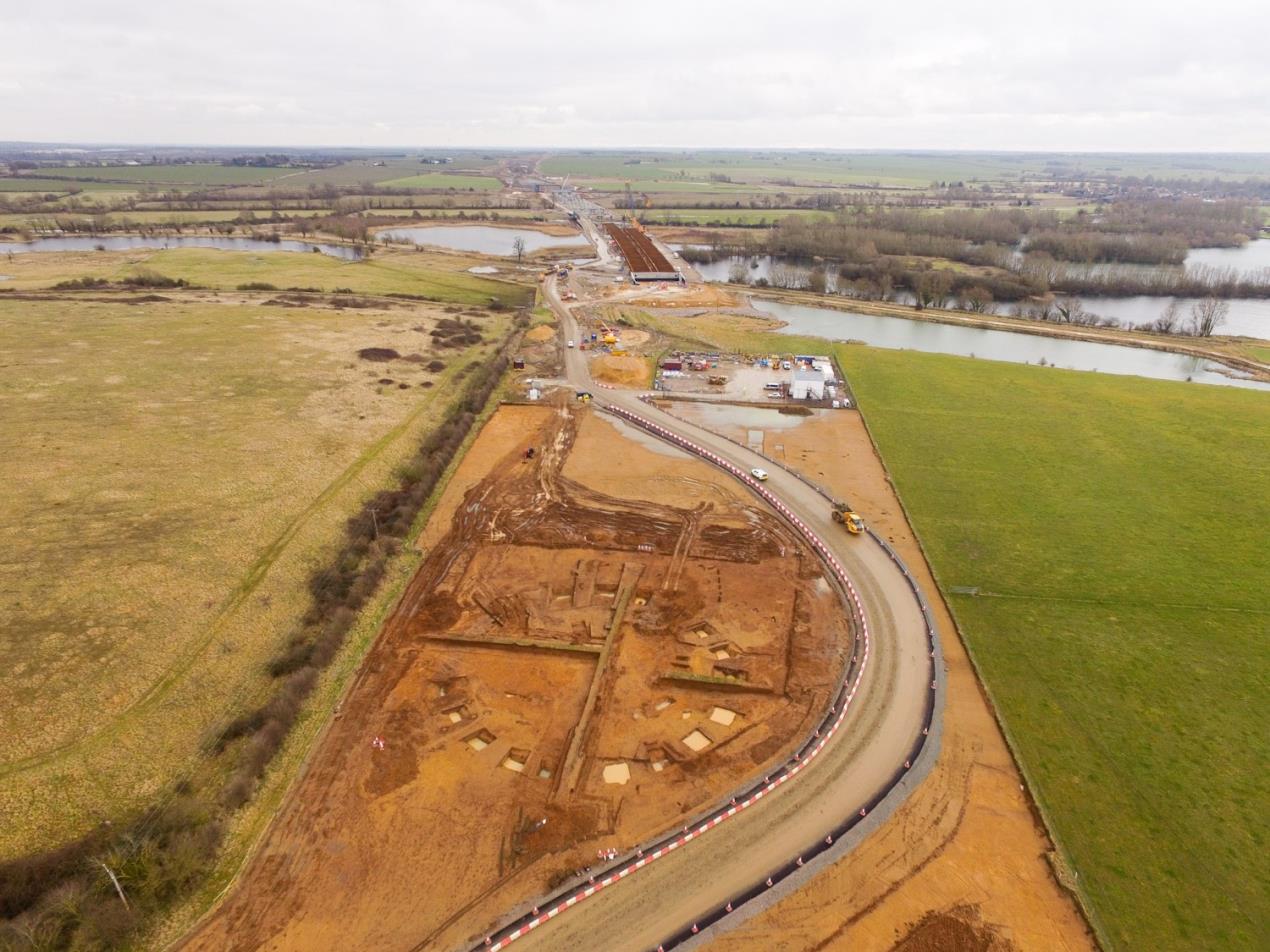 Caption: The A14 team excavated seven Bronze Age burial mounds dating back to 2,000 BC, including this one, (with a temporary haul road for construction curving round one side))near the 750-metre long River Great Ouse Viaduct

“In another location we found a Roman burial site where two of the burials had their legs removed below the knee. At first you think this may have been some macabre punishment carried out prior to death, but that would be more likely to occur during the Anglo-Saxon period, because this ‘punishment’ would be quite unusual during this Christian time. Skeletal analysis showed that they had not been sawed through and they had been removed post mortem, and scientific dating indicated the remains were Roman in date,

Highways England is retaining the services of Dr Sherlock, who will next be starting work on the A428 Black Cat to Caxton Gibbet improvement, while maintaining oversight of categorising and recording the A14 finds with partners MOLA Headland as they compile and archive the finds and produce reports from the excavations. 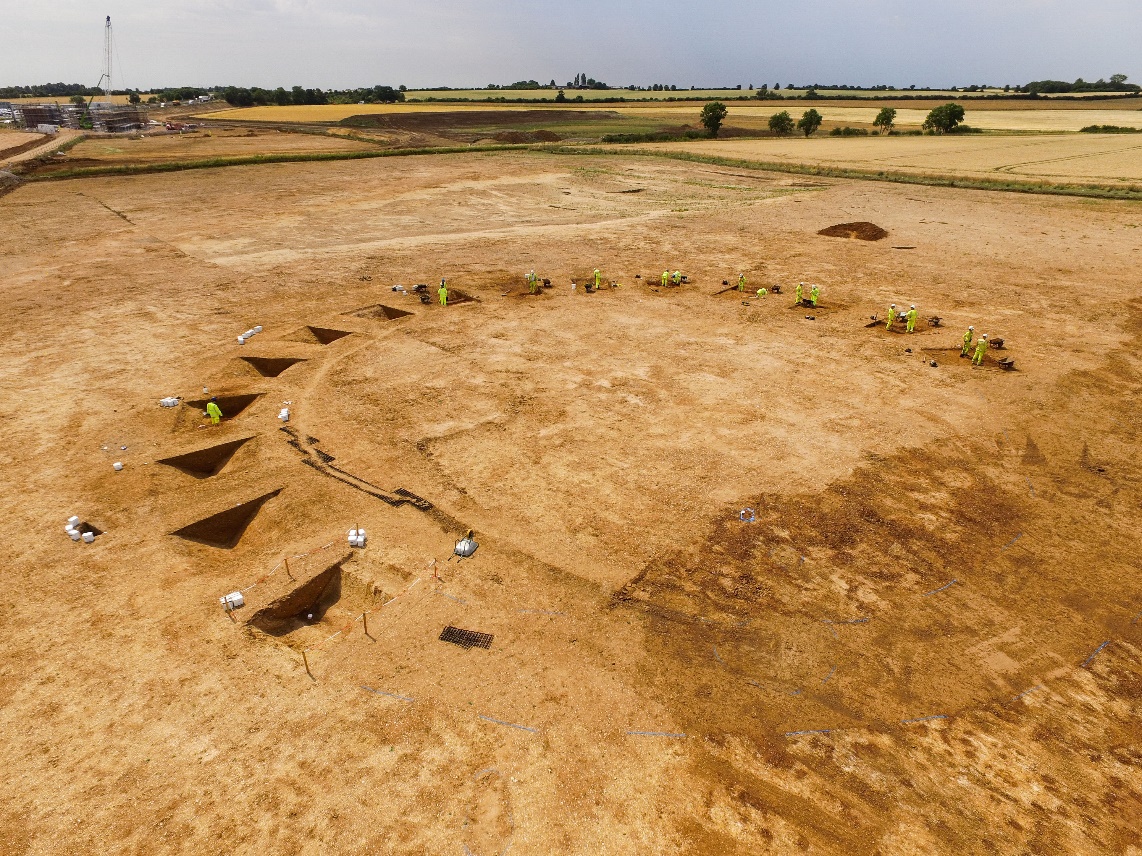 Caption: one of the Neolithic henges uncovered on the A14 project near the A1 at Brampton

“We know there are Roman and Iron Age sites along the A428, so I hope we’ll find more evidence for the Anglo Saxon and Medieval settlements in the area too. The gibbet (from Caxton Gibbet) in particular was often something that was used at parish boundaries as a warning to any criminals who may be entering – the body hanging there a Medieval version of ‘Please drive carefully through our village’.

“Having worked on the A14, there are lessons we can take to the A428, such as how we carried out the excavations, starting excavations earlier to focus the work and have areas ready for the construction teams, and all the experience from that earlier work. We can build on the collaborative approaches between the construction team, archaeological contractors, statutory bodies and other partners that have developed on the A14. 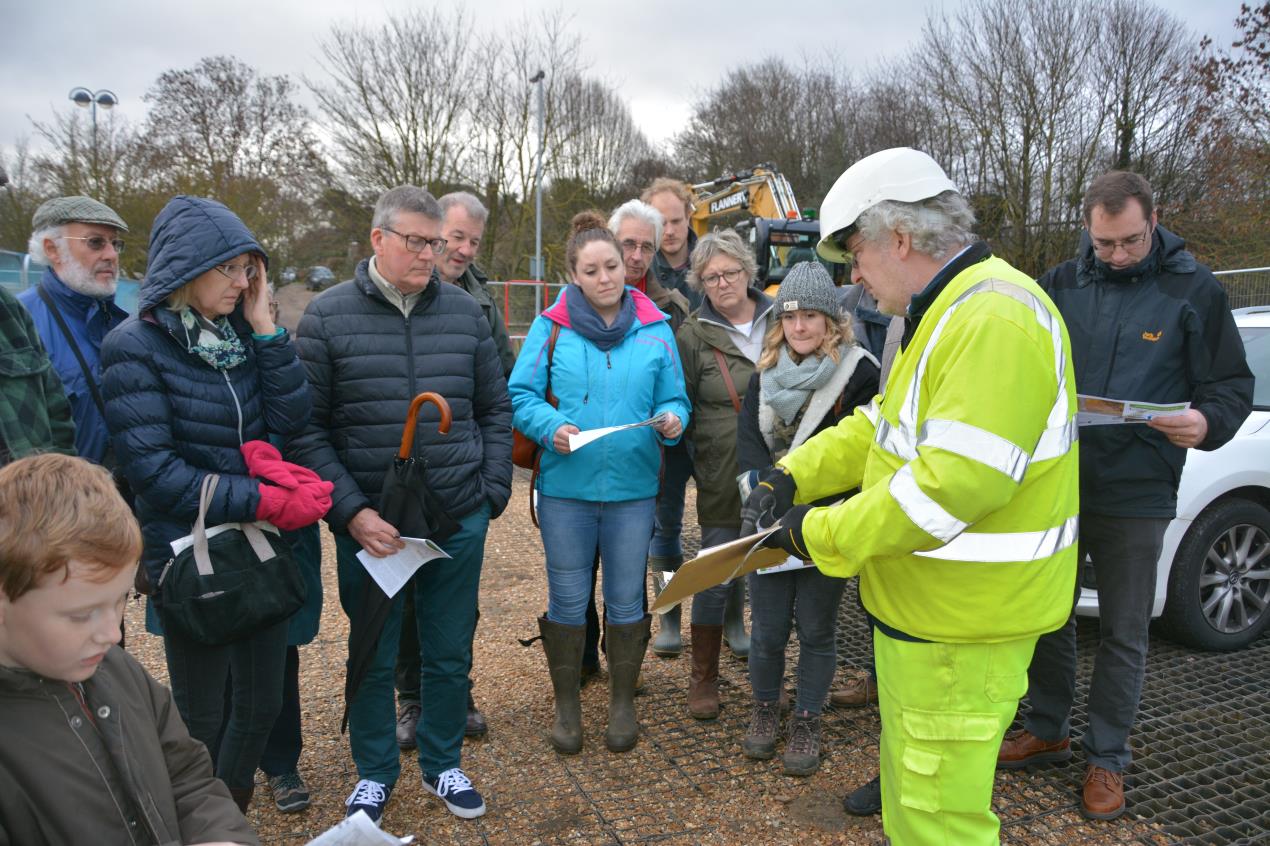 Caption: the A14 team holds a public open day to see the work of their excavations at Huntingdon

“There’s always a strong public interest in archaeology and heritage, in seeing what you excavate over the course of the construction. It’s good to work with the community and share what we have found of the local history. That’s something people can understand as it’s their area – when I did the dig in Catterick in 2013, I had people coming saying they visited the site when the Roman baths were dug up in 1959, and one lady who came even along with one of the decorated pieces of stone from the site then found later in her garden. On the bottom of the stone there was a Roman inscription there that hadn’t been seen before – we only found this out by talking to people in the village.”

Voting is currently open in all of the Current Archaeology awards categories. You can get full details and vote here: https://www.archaeology.co.uk/awards/archaeologist-of-the-year-2020.htm

Steve has just had his latest book published, A Neolithic to Late Roman Landscape on the North-East Yorkshire Coast: Excavations at Street House, covering the history of the area dating back over 6,000 years.

The A14 upgrade is progressing well, with the Huntingdon southern bypass having opened a month ago. Work on the remainder of the project is due to be completed by the end of 2020. The £1.5 billion project is widening 21 miles of the A14 between Cambridge and Huntingdon, which will shave up to 20 minutes off journeys for the 85,000 drivers who use this stretch of road daily.