Highways England and its partners are joining forces to create automated vehicles to lay cones on the country’s motorways and major A roads – and prevent workers having to lift an average 10 tonnes of equipment per shift.

Cones are needed to protect road users and road workers while essential improvements or maintenance is carried out on the busy routes.

But dramatic footage released today by Highways England shows how terrifying it can be for the workers who traditionally put the cones out, working in tandem from the back of a vehicle as motorway traffic thunders past just yards away. 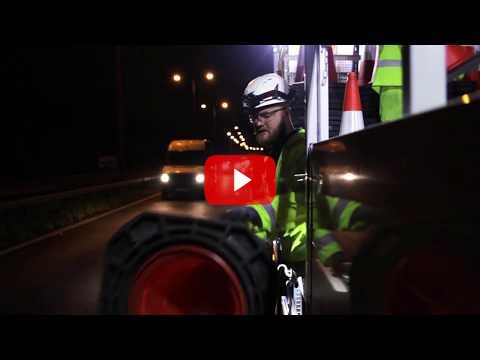 Caption: To witness the workers’ experience from the lorry view footage here

As the workers manually lift and place each of the cones, the footage shows vans and lorries rushing by, often beeping their noisy horns.

Now Highways England is working with a group of industry experts to develop pioneering machines that will take away the need for cones to be manually placed. This will improve safety and free up two workers to carry out other tasks.

The automated cone laying machines could be in use by the end of 2020.

“Safety is always the priority for Highways England and we are constantly looking for ways to ensure everyone who works and travels on our road network is protected.

“By taking out the human element in the laborious task of putting out cones, we will be taking out an element of potential risk. As well as taking away this physical labour, these automated machines could also save valuable person hours and allow us to redeploy the workforce to other traffic management duties.

“We are delighted to be working with all of our partners to create an innovative vehicle that will make this possible.” 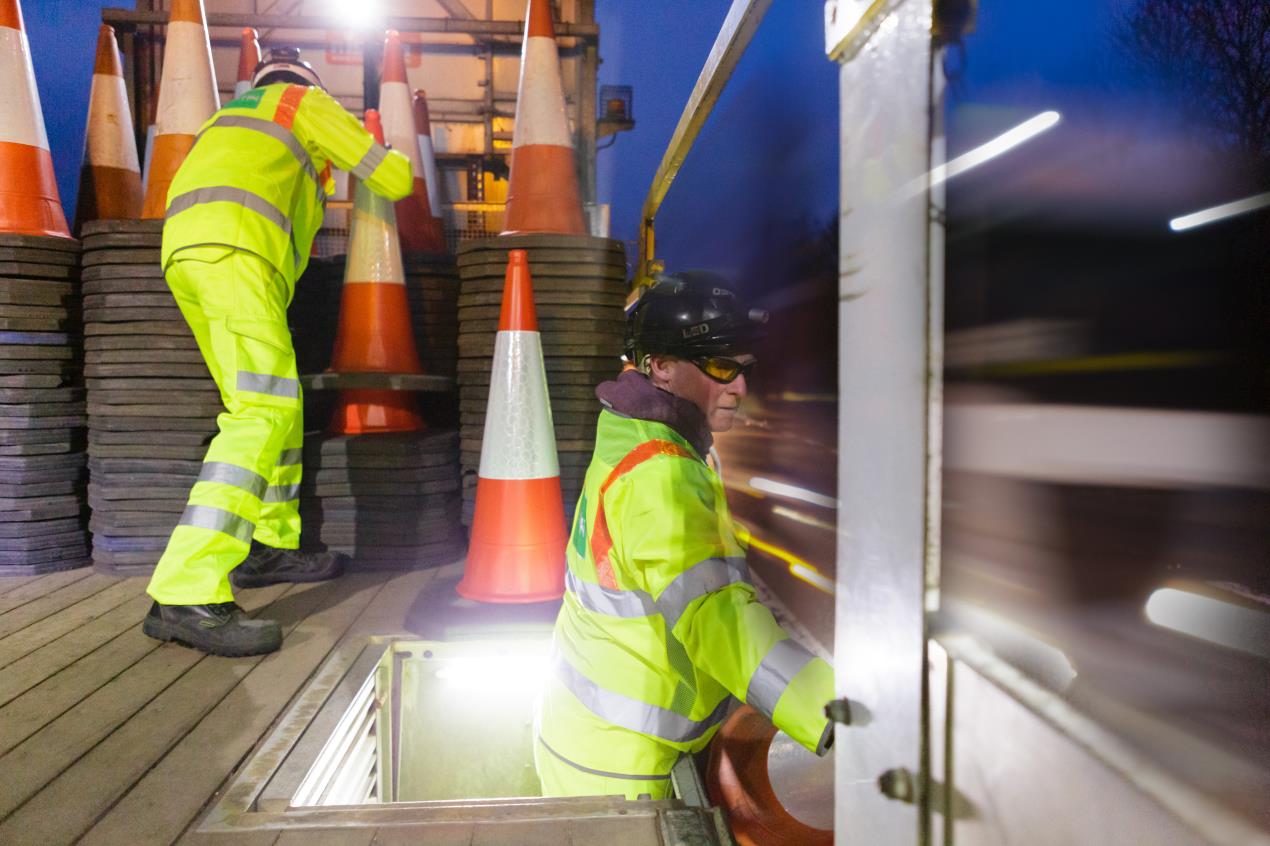 Experts from Highways England, Kier, HW Martin Traffic Management and competitors Highway Care and King Highway Products are working together in a collaborative effort to resolve this potential safety risk.

Highways England are funding the development and establishing a minimum standard while the companies themselves are developing the vehicles.

Putting out cones is still currently undertaken by two people on the rear of a vehicle working in tandem. The bulk of this work is undertaken at night and carried out in most weathers.

A typical 4km closure involves putting down – and later removing – approximately 260-300 cones, meaning that two workers will both handle between 5-6 tonnes per shift in cones alone.

When additional equipment such as frames, signs, lamps, sand bags are factored in, it is not unreasonable for them to lift between eight and 10 tonnes per shift.

A single kilometre of coning takes approximately 15 minutes to install and remove, resulting in an exposure time to live traffic of approximately two hours per shift.

To date, ergonomics experts have struggled to identify a suitable method of placing and removing cones that doesn’t have an impact on workers due to the twisting of the body required and environmental conditions that the work is undertaken in.

Two automated cone laying vehicles are being developed with testing due to get under way next month at a centre in Lutterworth, Leicestershire. If the tests prove successful the two companies will be able to take their vehicles to the marketplace.

Highways England criteria stipulates that not only must the machines offer a safer method for highways workers, they must be safe for all road users and pose no further risk to traffic.

It is hoped both machines – if they prove themselves in testing – will be implemented in late 2020. 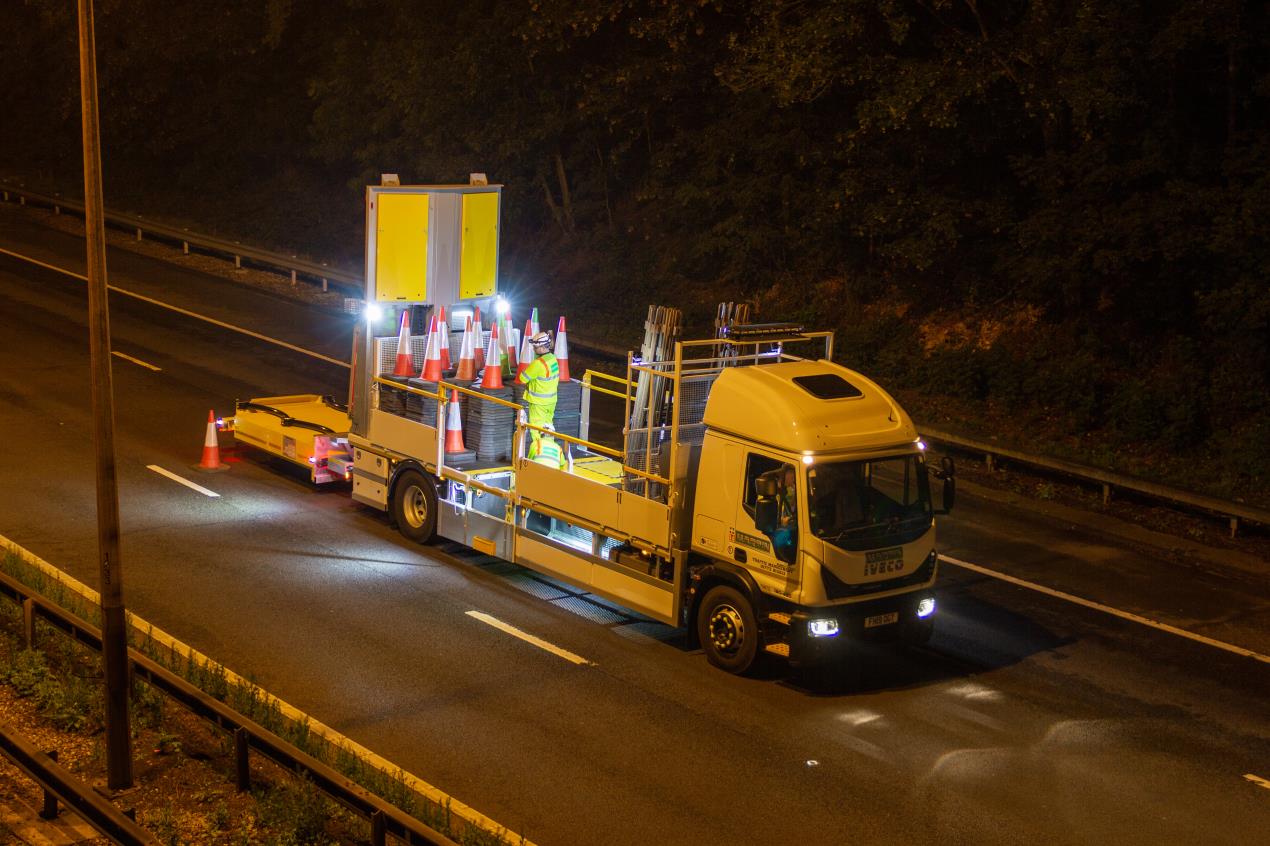 Caption: Two men work in tandem on the back of a lorry putting out cones. For hi-res image click here.

Highways England is committed to investing in innovation and this is the latest automated machine which has been put to use to improve safety and reduce disruption for drivers.

A quirky road-marking robot is being used to mark out new or resurfaced roads saving hours of engineers’ time on schemes across the country and avoiding hundreds of hours of disruption.

And tests began last year on the A14 of self-driving dump trucks which move huge amounts of earth and provide the potential to work around the clock so could help reduce the length of time roadworks are on the ground.