The £1.5 billion scheme to improve journeys between the East of England and the Midlands was originally planned to open to traffic by the end of 2020.

Today the Government-owned company said it plans to open the A14 improvement ahead of schedule this spring.

The good news follows the recent December opening of a part of the 21-mile scheme – a new 12-mile bypass south of Huntingdon – a whole year early. Already, the bypass has been used to make more than five million journeys. 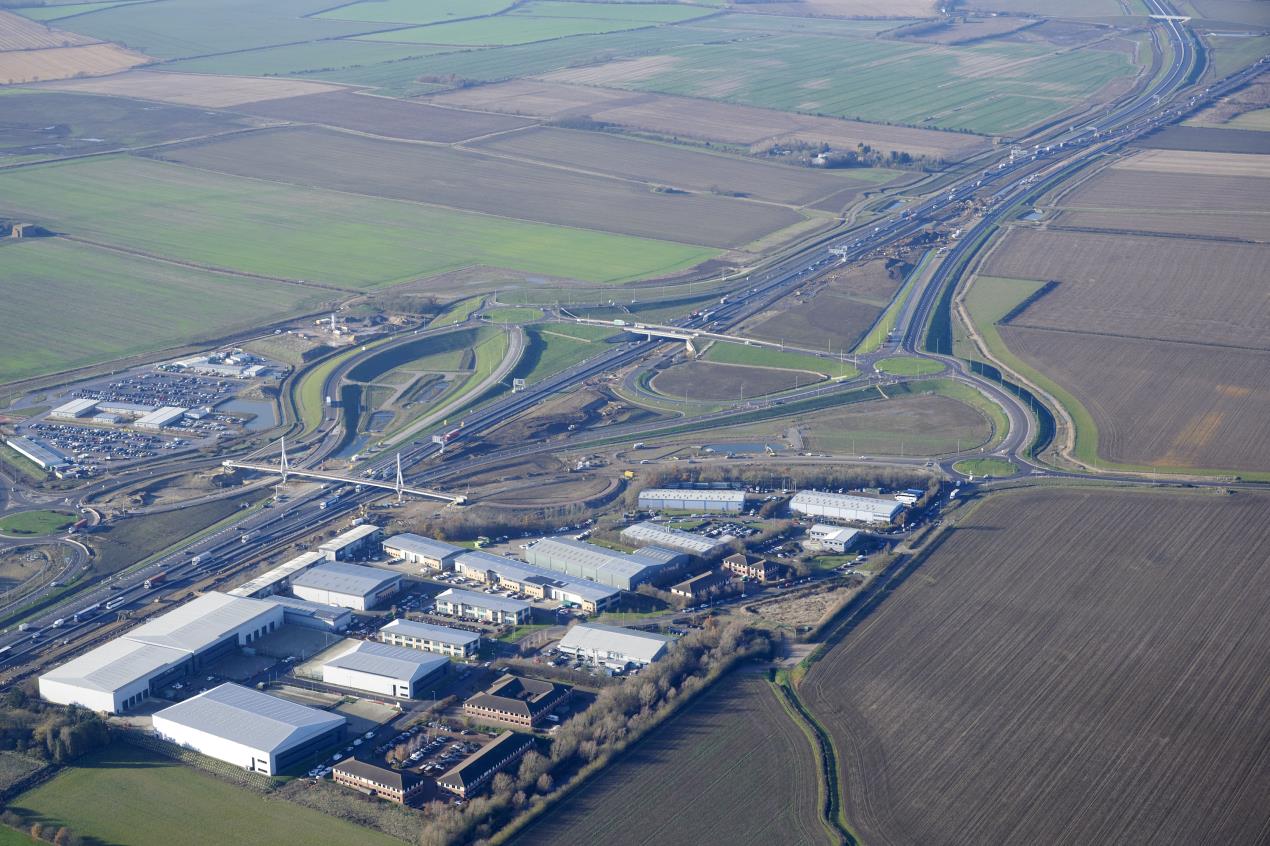 Caption: The new Swavesey junction with its landmark pedestrian and cycle bridge

“The A14 is a vital route used by 85,000 drivers every day and including more than 21,000 hauliers transporting essential goods around the country.

“Opening this scheme more than six months early and on budget shows what the UK construction industry can achieve working with Highways England on the Strategic Road Network. I would like to thank them for their focus on our joint success and for their one team approach.

“Also, I would like to thank road users, residents and stakeholders for their patience and support during our work. This road is not just a piece of national infrastructure – it brings benefits to the region and local towns and communities too.”

“I’m delighted that the A14 upgrade will open ahead of schedule, not only meaning drivers will benefit from quicker and safer journeys sooner, but also ensuring that key access between the region’s ports and the West Midlands will be boosted.

“Investing in key transport links such as this is part of this Government’s plan to level up access across the country, ensuring all regions are better connected and improving journeys for all.” 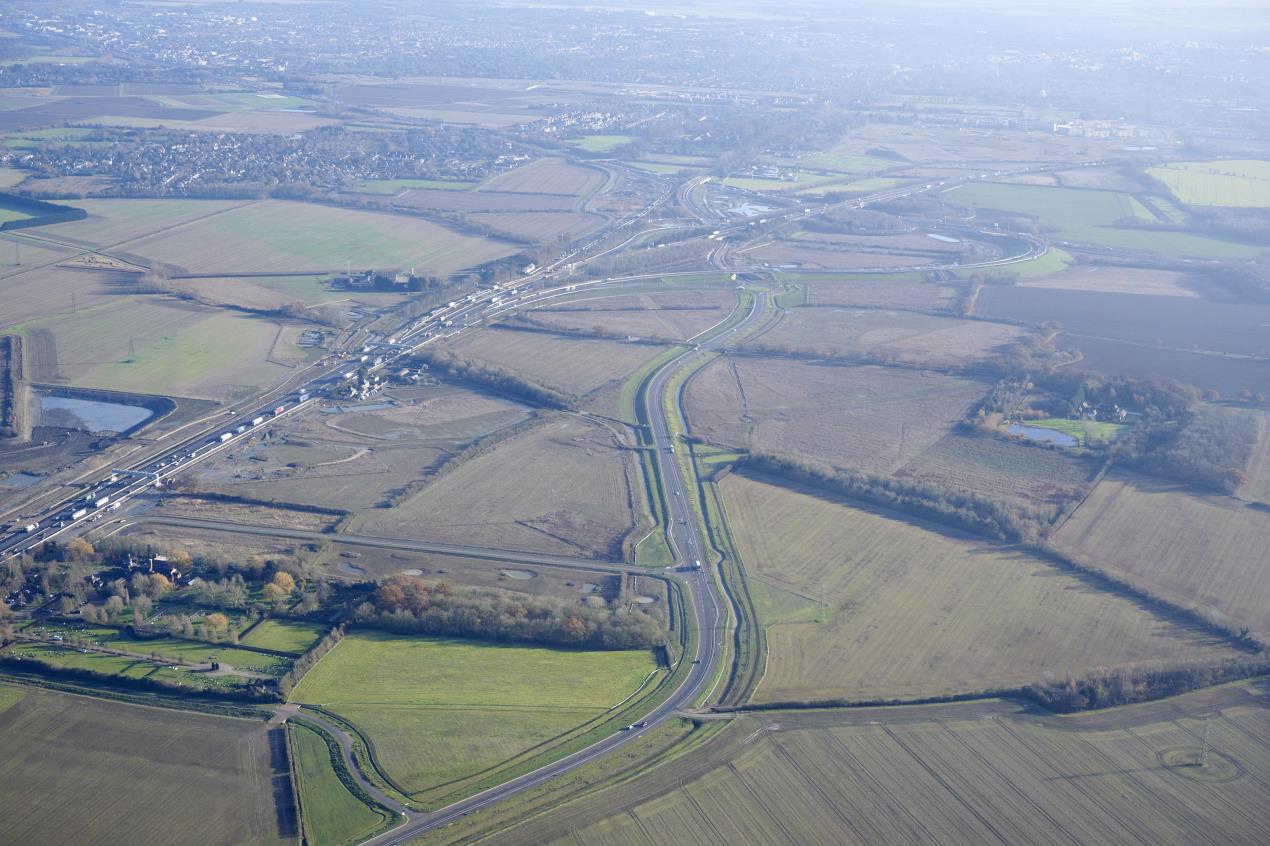 Caption: the new A1307 (centre), Girton interchange link (top) and A14 (left) near Cambridge

Work on the project began in November 2016, and has employed around 13,000 people in total, with up to 2,500 working on site during the project’s peak who have been working hard to deliver an early opening for traffic on the new A14.

Besides the Huntingdon southern bypass, the project includes an upgrade to the A14 between Swavesey and Milton, and a new local access road, the A1307, which runs parallel to it between Cambridge and Godmanchester. Approximately 24 miles of new routes for cyclists, walkers and horse riders are also included in the scheme.

The spring opening date will mark the end of permanent roadworks and reduced speed limits on the new A14 and the A1307, but the project team will still need to carry out a number of completion activities such as landscaping, installing some of the new technology, and work in the verges. To carry out this work safely, some temporary overnight closures or off-peak daytime lane closures will be needed.

The A14 transformation complements other improvements Highways England is delivering along this corridor, which is a key link between East Anglia, the UK’s busiest container port at Felixstowe, and the Midlands. In 2017 a £191 million improvement of the Catthorpe interchange, where the A14 meets the M1 motorway providing free-flow links for the 150,000 drivers passing through daily, in addition to new pedestrian and cyclist routes.

Later this year Highways England expects to seek planning consent for proposals for a new dual carriageway A428 between Caxton Gibbet and the Black Cat junction with the A1 in Bedfordshire, and £300 million improving three junctions and upgrading three stretches of the A47 to dual carriageway between Peterborough and Great Yarmouth. There are further plans to add a third lane to the A12 between Chelmsford and the A120, and a multi-billion pound new Lower Thames Crossing to alleviate pressure on the Dartford Crossing, with the latest consultation into this now underway. 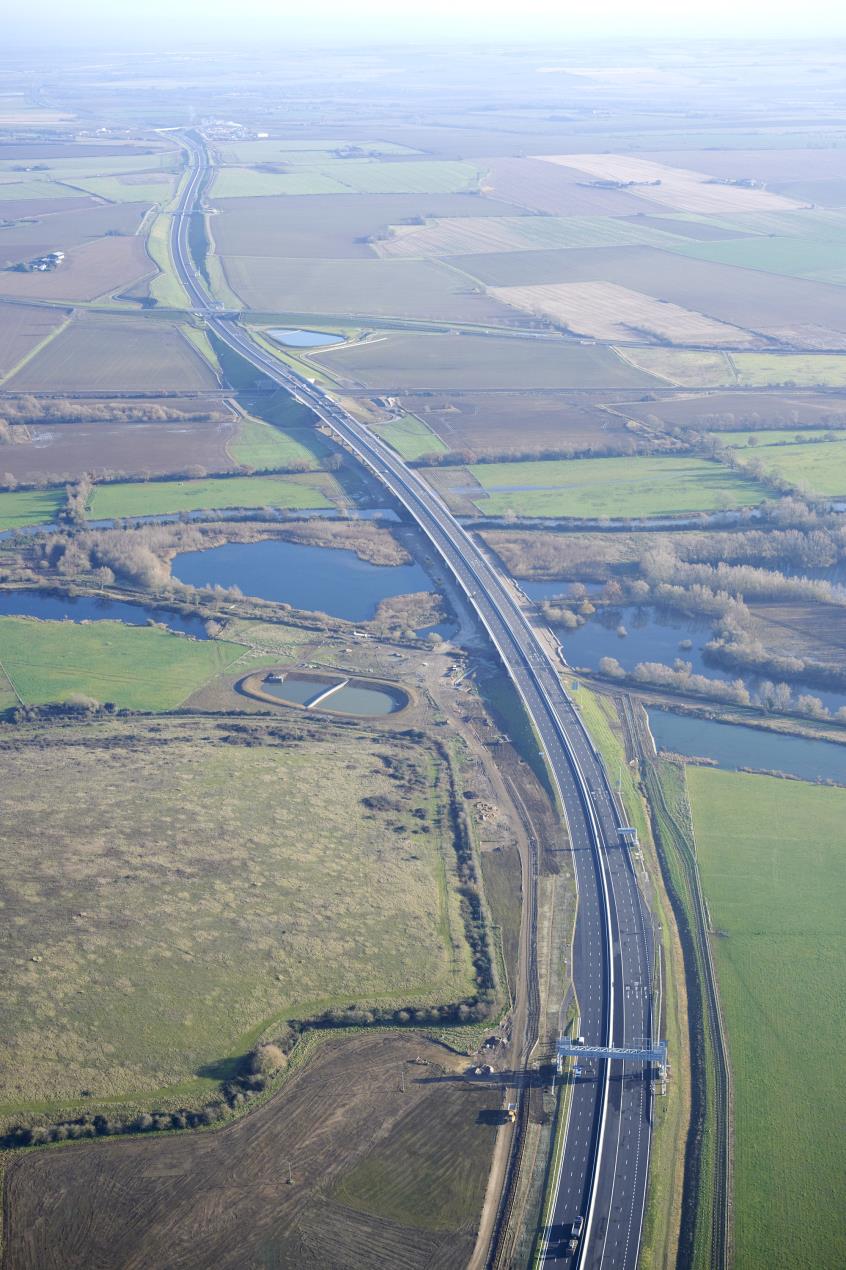 The A14 project has acted as a trailblazer for safety and environmental best practice, with measures including:

The project team has also been running a dedicated project website and social media pages, as well as using a mobile visitor centre for face to face events, to share up-to-date information and discuss progress and issues with local communities.

Following the opening of the Huntingdon southern bypass, work began to dismantle the old A14 railway viaduct at Huntingdon, and new link roads are being built into the town. This work started in late 2019 and on target to be completed by 2022.

The old A14, now known as the A1307 east of Huntingdon and along the Alconbury spur, and A141 west of Huntingdon, will be handed over to Cambridgeshire County Council once the project is completed. It will be used as a local access road running parallel to the A14 and serving the surrounding communities.

Construction on the project continues at pace to meet this ambitious deadline and information about progress and upcoming closures will be shared in advance via the project’s usual communications channels. 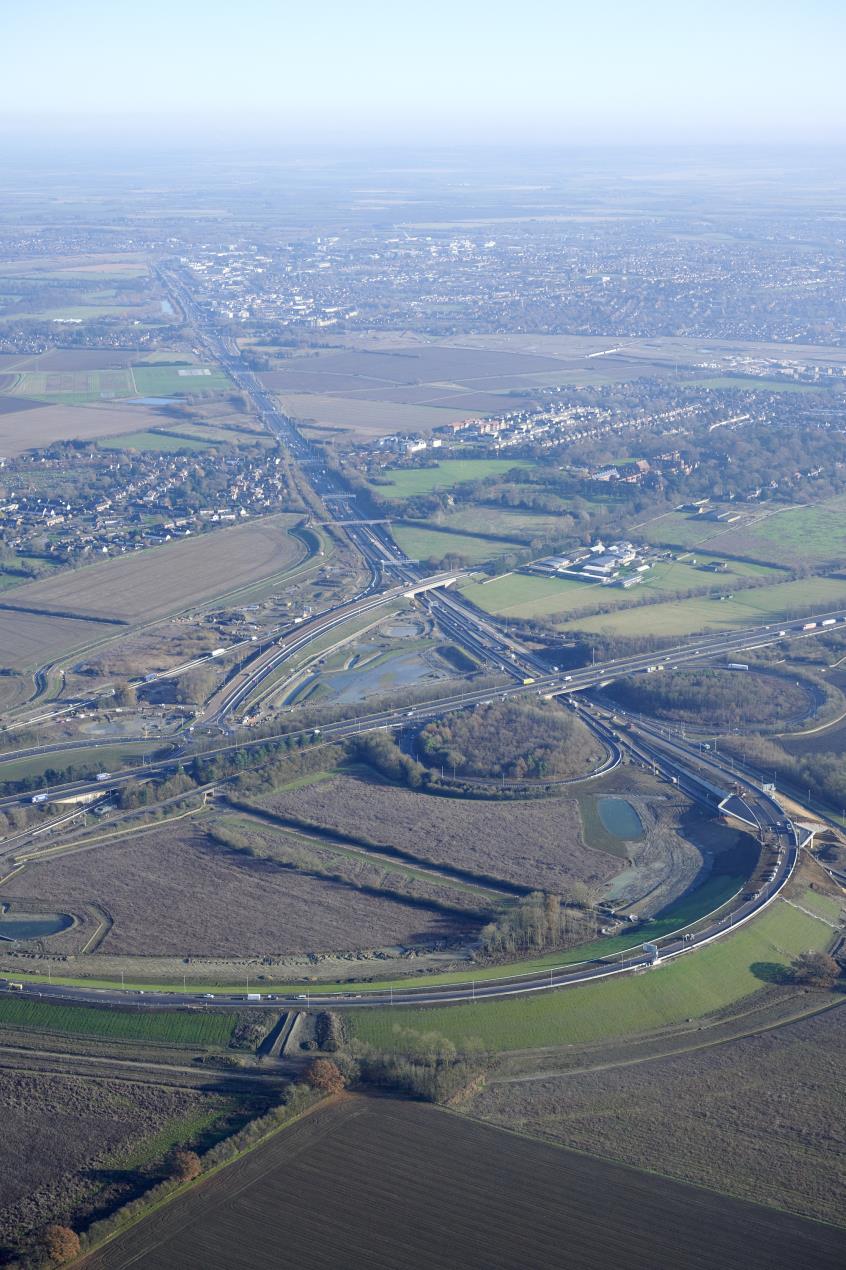 Caption: the new Girton junction leading to the A14 westbound (left)