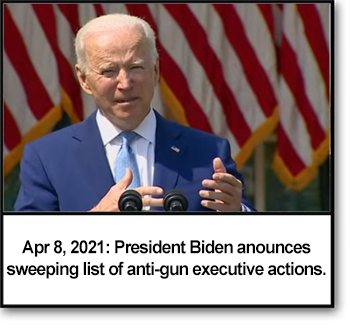 So if you have not already, please sign your “Stop Biden’s Gun Ban” Petition right away.

This is what Biden is trying to force on Americans without any act of Congress:

*** Outlawing the American tradition of home-crafted firearms without government permission.

*** Banning commonly-owned pistols that incorporate stabilizing braces, a harmless accessory that makes a gun safer and easier to shoot.

*** Directing the Justice Department to force its authority by drafting a model “Red Flag” Gun Confiscation bill and pressuring state governments to comply.

And to top it all off, Biden is nominating David Chipman, a henchman for the Gun Control Lobby, to head up the Bureau of Alcohol, Tobacco, Firearms, and Explosives (ATF). 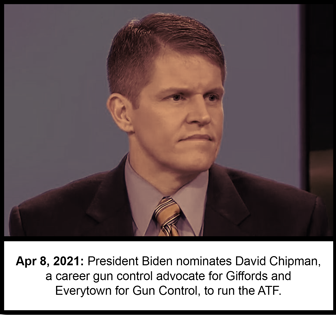 With nearly a decade of working for Gun Control, Inc., Chipman is a zealot who will walk lockstep with Biden’s gun control directives.

And get this, in an online forum, Chipman recently bragged about enjoying “Pushing back against pro-gun bullies who believe you have to turn your man card in to advocate for [gun control.]”

The National Association for Gun Rights is more than happy to be the “pro-gun bullies” who crush Chipman’s hopes of running the ATF.

But in order to make our stand against every one of Biden’s assaults on the Second Amendment, we need all hands on deck.

So please, if you have not already, take a moment to sign your “Stop Biden’s Gun Ban” Petition right away.

Biden’s gun control demands were not limited to what he included in his executive action package.

He also called on his cronies in Congress to pass the copious California-style gun control bills that have already been introduced.

From H.R. 8 Universal Gun Registration, to H.R. 1446 de-facto waiting periods, and Dianne Feinstein’s ban on so-called “Assault Weapons,” Biden is calling on Congress to go all in to dismantle the Second Amendment.

Biden even says American gun manufacturers should be held legally responsible for the actions of criminals and madmen.

Biden must be stopped.

And the activism and generosity of the pro-gun grassroots so far has been nothing short of inspirational.

But we are up against an enemy with virtually unlimited funds.

So even if you have already generously donated to the fight, I am asking every pro-gun patriot to double down on their investment by contributing $150 or $100 today.

NAGR defeated Biden’s gun control before, and we are ready to do it again.

But taking on the President and the Gun Control Lobby will be a costly undertaking to say the least.

So please, consider what is at stake, and make your most generous contribution today.

Even a donation of $15 or $30 will go a long way in this most critical fight.

We need as many “pro-gun bullies” in this fight as possible.

His demands include bans on home-manufactured guns, common accessories, and a scheme to coerce states into passing “Red Flag” Gun Confiscation laws.

And to top it all off, Biden is nominating David Chipman, a top adviser to the Gun Control Lobby to head up the ATF.

Biden’s assault on gun rights must be stopped.

And please help fund the fight by making a generous donation of $150, $100, or $50 to your National Association for Gun Rights today.

END_OF_DOCUMENT_TOKEN_TO_BE_REPLACED

If you listen to the media, even today, they’ll tell you the 2020 Election was a perfect, fair, and open election. They continue to deny (like children with their fingers in their ears) the shocking evidence that suggests otherwise. Despite what many people think, however, the media wants us to accept what happened. Just move on with our lives. But it’s not over yet. One of the states that had contest results, Nevada, is seeing a top leader punished by the GOP. And liberals are taking notice.

END_OF_DOCUMENT_TOKEN_TO_BE_REPLACED

Joe Biden wants to disarm law-abiding American citizens with UNCONSTITUTIONAL gun control measures, but his son, Hunter, is allowed to break the law and lie on federal background check forms to get a gun with no consequences.

Does that seem fair to you?